When writing historical fiction, it’s so easy to get lost in the details and never write. That’s where I’m at in my current scene. It takes place at the Plaza in late October 1924. There are lots of pictures of this famous hotel inside and out. However, I have been unsuccessful in finding a photograph or a vivid description of the Grill. Below is my process on how I mix both fact and fiction to create my settings.

# One: I knew nothing about the Plaza or where it was located. Nowadays it’s far easier to just jump online and go to the first link that pops up in your Search Engine. Not me. My first stop is still a book(s). One of my go to beginning sources are children’s non-fiction. They get to the point quickly and don’t offer a lot of details. I picked up: (1) New York: Everything You Wanted to Know (2) Eloise at the Plaza.

# Two: My library had nothing on the Plaza at all. So I did a quick Amazon.com search to see what was available. I found five sources: (1) Sonny Kleinfield. The Hotel: A Week in the Life of the Plaza (2) Ward Morehouse III. Inside the Plaza: An Intimate Portrait of the Ultimate Hotel (3) Curtis Gathje. At the Plaza: An Illustrated History of the World’s Most Famous Hotel (4) Eve Brown. The Plaza Cookbook (5) Eve Brown. Plaza: Its Life and Times.

# Three: I checked Worldcat to see if any of these five books were at my local library or libraries that were within driving distance. Nope. I was out of luck. So then the crabby cheap scape voice in my head starts whining about not spending any more money on books this month that I should intern library loan them. However, when I go to ABE.com, all five books were under $5.00 with free shipping. That’s just $2.00 more than an interlibrary loan. I decided to splurge and buy all five books. 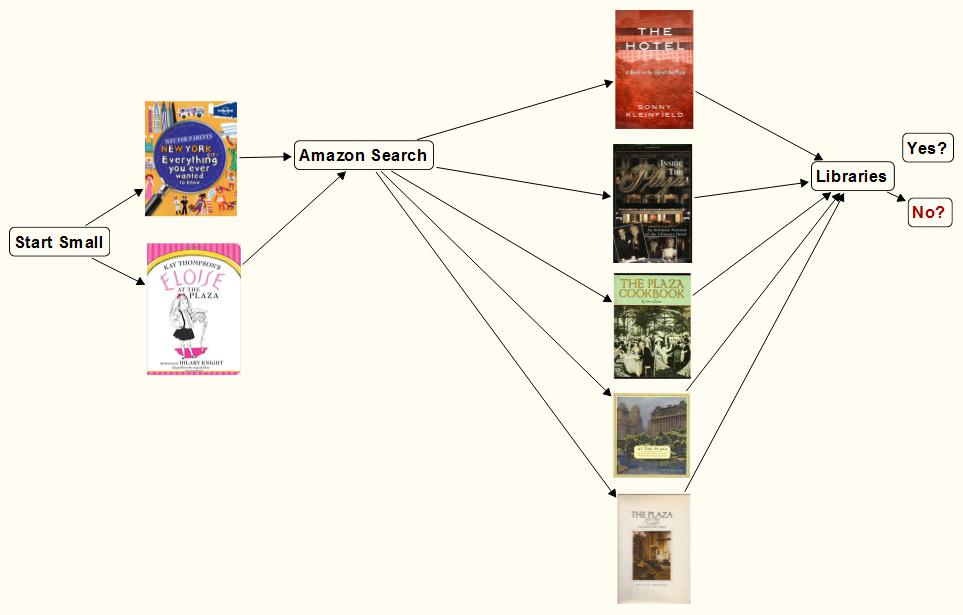 # Four: They took about two weeks to arrive. Playing the waiting game, I decided to search online to see what I could find on the Plaza and the Grill. I could find only two online sources that fit my needs (1) (2), but none of these offered a photograph of the Grill. Both of these sites did mention F. Scott Fitzgerald of whom I completely forgot about his obsession with New York City and the Plaza. I attempted to check out Fitzgerald’s The Beautiful and the Damned, but my library couldn’t locate it in their collection (even though their website said it was checked in). So, I had to go here. Fitzgerald described the Grill but in very limited terms.

# Five: The books began to trickle in slowly. (4) Eve Brown. The Plaza Cookbook, I had been looking forward to reading thinking it would really meet my needs was a bust. More of a craft book than a cook book. (1) Sonny Kleinfield. The Hotel: A Week in the Life of the Plaza, I was actually going to have to read this book cover to cover. The events depicted were well past the 1920s (1990s), but I figured not too much as probably changed for the workers of the hotel. (2) Ward Morehouse III. Inside the Plaza: An Intimate Portrait of the Ultimate Hotel & (5) Eve Brown. Plaza: Its Life and Times, were okay. I could skim them, but they touched on similar things except told me when the Grill closed. (3) Curtis Gathje. At the Plaza: An Illustrated History of the World’s Most Famous Hotel, provided the best photographs and images of the hotel. There were no photographs of the Grill, though. The closest thing I could find was the remodeled version from the late 1940s in the Rend-vous room.

# Six: Now, I combine the sources I found from the internet and few tidbits here and there from the books.

# Seven: Then the scene looks something like this with the few items I need to research put into [brackets]:

I waited a half hour after Laura and C.J. departed before heading down to the lobby with my purse and the stack of newspapers clutched beneath my arm.

Laura’s new companion didn’t even bother coming up to our suite. He had the front desk announce his arrival from the telephone. I put his rudeness aside. His presence had allowed me one night of freedom.

The gloominess outside couldn’t penetrate the hotel’s interior. The walls were painted a blinding white. The light from the chandeliers winked at me like the glint in the eye of a half a dozen mischievous boys. I had to grip the railing tighter than normal. Every step downward jarred my ribs. Maybe I shouldn’t have taken Jake so far on that walk.

In the lobby, my footsteps echoed off the elaborate marble. The perfume of freshly cut flowers dulled the odor from the unwashed bodies of the travelers grouped around the L-shaped desk. After months of rooming in cheap hotels and boarding houses on the campaign trail, the opulence of the place made a queer knot form in my stomach. Even if Walley could have afforded a place like, staying here would have alienated his voters. I felt the guilt creep back in and I tried to ignore it. Maybe another cigarette, a good stiff drink, and some food would take my mind off him for a little while.

“May I help you?” The attendant behind the desk wore a swell suit. He had parted his hair down the middle and smoothed it down with Brilliantine. His hair’s severity didn’t soften his sharp features at all. It gave him the impression he’d sucked on one too many lemons. Maybe the last lemon wasn’t so tart. He smiled at me and his brown eyes were kind.

I stepped toward the desk and told him what I wanted. A phonograph with some Negro records, a suggestion on where to eat, and where I might purchase some food for Jake. C.J. and Laura hadn’t bothered themselves with him since we’d left Chicago.

The attendant smiled and gestured toward the hallway near us. “The Grill has delectable food with a wide selection of wines and champagnes not found elsewhere in the city stocked well before that inconvenient law.”

“The place have anything stronger than wine and champagne?”

His smile widened a little bit and his brown eyes danced like the twinkling light overhead. “I’m certain that may be arranged. I’ll send someone out to fetch the records and a phonograph immediately. And as for your dog, room service has a menu strictly devoted to meeting you and your canine’s needs.”

My eye brows rose at that. Room service for pets. What else did this hotel offer?

“Caldwell. And you are welcome, Miss O’Brian.”

I frowned. There had to be well over two hundred room in the hotel and twice as many guests.

The man’s smile dimmed, but the sparkle in his eyes remained. “It is my job. Enjoy your evening, Miss O’Brian.”

Maybe I should have found another place to eat. The clerk’s suggestion led me to the basement. With my hand pressed against my side and my pinched face, I must have given the impression that I required immediate attention.

I was seated at a round table with a placement of four. I nudged aside an empty glass, a fancy plate, and silverware to deposit my newspapers and purse onto what appeared to be a soft, white tablecloth. Clouds of cigarette smoke hung so thick in the air I had to blink away the stinging sensation. The yellow light overhead waved back and forth as I was in a giant shadowed fish bowl. I could make out the faces of the patrons closest to me. A couple [Arnold & Carolyn Rothstein] and several of the college set giggling at the empty bottles of champagne on their table. But the men in the orchestra playing Mozart’s [piece] at the back of the room, their faces were mere hazy outlines. I hoped their food and liquor proved better than the atmosphere.