I’m a character person. I loved to pepper my stories with banter. And people not saying what they really mean to say. When it comes to plotting, I’ll admit, it’s not one of strong point. So in the past week I decided to brush up on some books that’d been laying around the house (or on the Nook) that I haven’t managed to read yet.

All of these novels focus on plot by having you look long and hard and what the main character’s goal should be. Gerke doesn’t shy away from giving you examples of authors that lean one way of another (I found him a bit heavy-handed on using his own work repeatedly. Thought he could work a little bit harder to come up with other authors’ examples). The writer should strive for the middle of the road or close to the middle of the road, let’s say either character or plot 51% + 49%. Those that can strike a balance have much better change of making their story a bestseller.

Tapply focus more on the mystery genre. He suggests heavily plotting technique. One of his most useful suggestions is to write out the murder before hand. Who did what to who and how. Knowing this will help you keep up with the clues, provide the appropriate red herrings and make the story satisfying to the reader.

I attempted, with a piece of paper, to draw each clue and plot point out, but ended with a frustrating mess. I needed something more visual. Something that was easily corrected by hitting ‘delete’ if I wanted. After some searching I discovered Scapple created by the same developers of the writing software Scrivener. You jot down an idea and can draw lines and connecting points to each little thought. The developers offer a free thirty day trial (which I’m using). After that it’ll cost you $14.99. But I suppose a little deduction to the wallet isn’t so bad when you can visually see your plot and avoid all the hassles of trying draw a picture in your mind of how everything is connected. 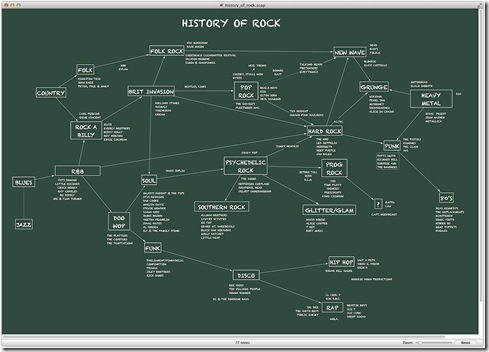